Thor is a middle-aged man who is searching for purpose following a series of tragedies.

His home planet even exploded.

As the narrator tells us, it seems that "everything and everyone he loved, he lost."

Thor may be in a state of retirement, but he's not done fighting.

The so-called "god of thunder" is always ready for a tussle – and he gets one when he learns of a ghost-like creature who is traveling from galaxy to galaxy with a deadly "god-killing" sword. His name is "Gorr the God Butcher," and he's on a journey to kill every god in the universe.

The new film Thor: Love and Thunder (PG-13) tells the story of Thor as he battles for self-survival. The film stars Chris Hemsworth as Thor, Natalie Portman as Jane Foster and Tessa Thompson as Valkyrie.

Here are four things you should know about the film: 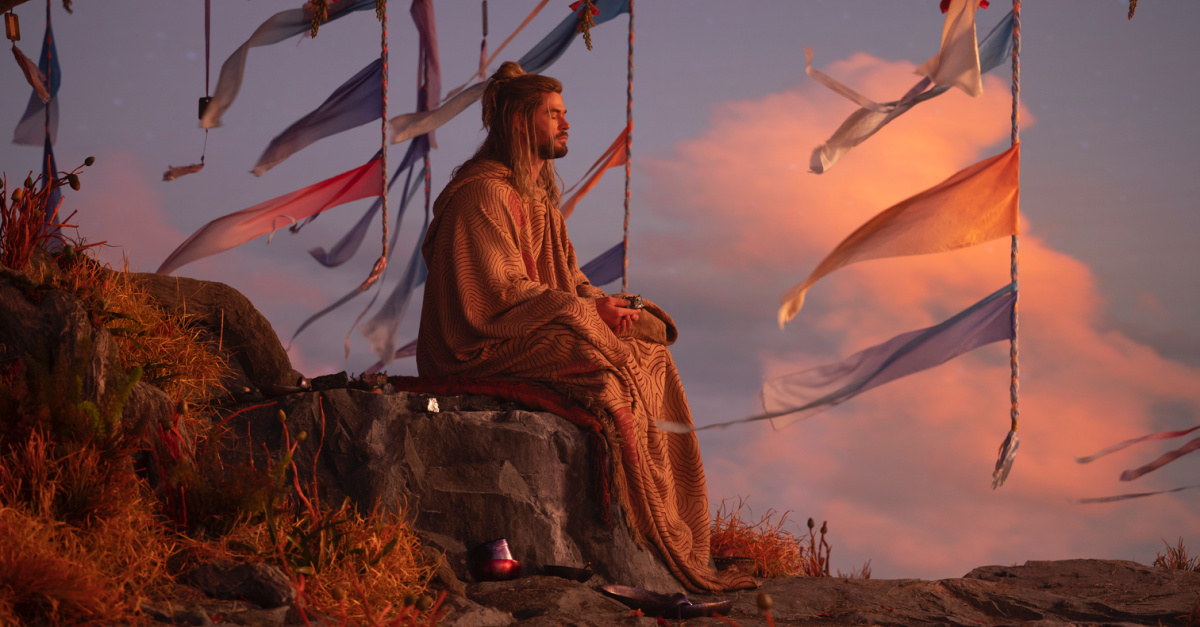 1. It's the Fourth Thor Movie

The first Thor film was released in 2011, telling the story of the hammer-hurling god of thunder as he confronts his brother, Loki, in a battle for the throne of Asgard. (Thor decided the throne wasn't his thing.) Since that first film, both Thor and the actor behind him (Chris Hemsworth) have gradually aged. In 2013's Thor: The Dark World, Thor and Loki teamed up to save their kingdom from the evil Dark Elves. In 2017's Thor: Ragnarok, he faced his sister, Hela, the goddess of death.

By the time 2022's Love and Thunder opens, Thor is in a semi-state of retirement, with children of the universe hearing stories of his legendary antics.

As his friend Korg puts it, Thor is "Waiting in quiet contemplation for someone to say, 'Thor, we need your help to win this battle.'" 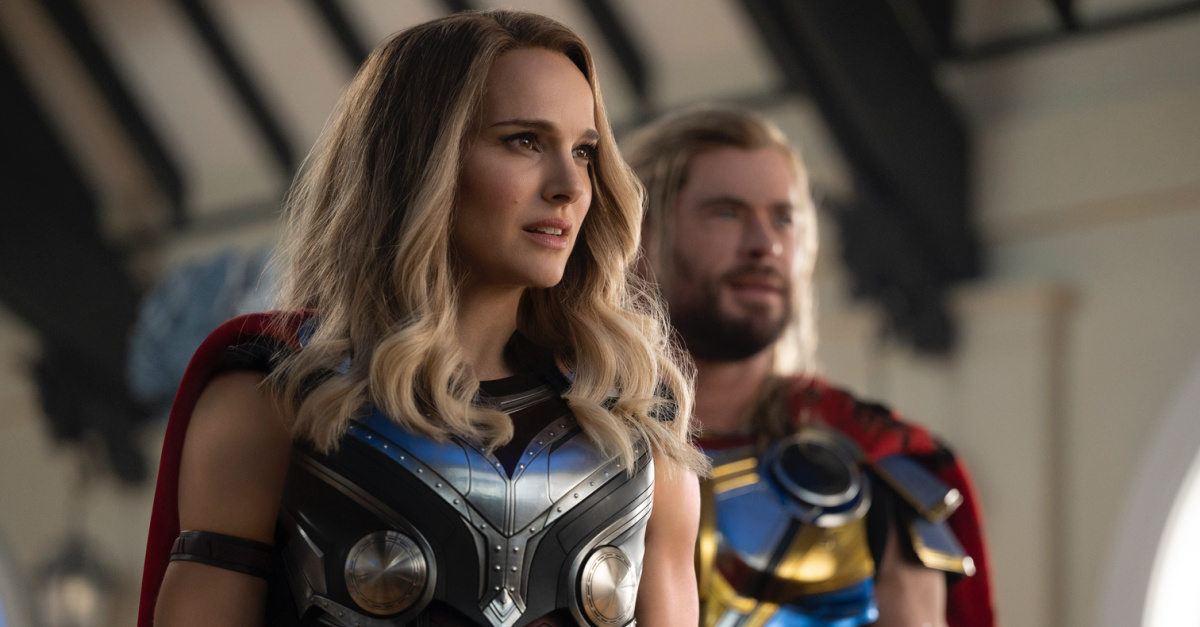 2. It's about Gods, the Afterlife and Love

Thor movies are known for the discussions of mythical gods and goddesses – after all, Thor is one – but Love and Thunder takes this theme to the next level.

The film opens with a scene of a mortal Gorr carrying his dying daughter in a parched desert and praying to a god for rain. After the young girl dies, Gorr comes face to face with this god, who acknowledges he cares little for people and even less for their health. Enraged, Gorr kills the god with a god-killing "necrosword" and pledges to continue his reign of revenge.

"This is my vow – all gods will die," Gorr pledges, becoming "Gorr the God Killer."

Unfortunately, most of the other gods don't want to fight Gorr. As a frustrated and courageous Thor says, the gods have "lost our way." If Gorr is to be destroyed, it must be done by Thor, Valkyrie and Thor's ex-girlfriend, Jane Foster.

The gods of Love and Thunder contrast sharply with the God of Scripture, who is all-loving, all-powerful and all-knowing. (Even Zeus, who is often presented as the most powerful in Greek mythology, tells Thor he is scared of Gorr and believes Gorr will win.)

This contrast of worldviews also includes the film's view of the afterlife, which – apparently – only goes to those who die in battle. (Gorr, though, claims "there's nothing for you after death except death.”)

Love and Thunder contains solid messages about selflessness, sacrifice and love. When others fear Gorr, Thor and his companions put their lives on the line to save not only the universe but the children of New Asgard (who Gorr had kidnapped.)

Quoting Jane, Thor says he learned there is "no greater purpose than to help those in need."

Thor briefly dons a theologian's cap toward the end of the film, saying Gorr does not seek death or revenge – but love. Love, Thor says, is what everyone seeks – even the bad guys. 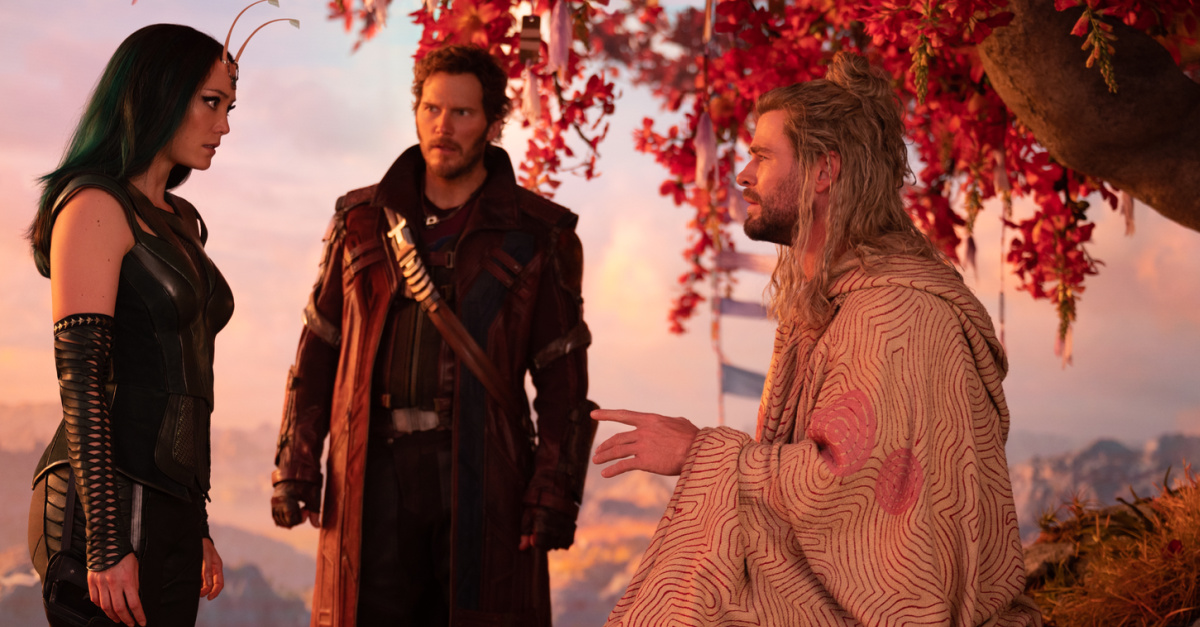 3. It Has Several Surprises

Love and Thunder is more than just a Thor film. It also includes the entire Guardians of the Galaxy crew – at least, the ones who are still alive (Star-Lord, Rocket and Groot are among the living). And even though the Guardians aren't the main focus of the film, they are involved in multiple scenes.

Matt Damon makes a cameo. So do Melissa McCarthy and Luke Hemsworth. All three play central roles in the film's frequent humor -- something that is a hallmark of Thor films.

Thankfully, in Love and Thunder, the comedy mostly stays in the family-friendly territory: Monster-sized space goats guide Thor's chariot across the universe, screaming frequently along the way.

A New Asgard theater crew recreates the highlights of Thor's life, with an over-the-top McCarthy filling the role of Loki.

Love and Thunder is creative and hilarious, even if it has a few hiccups that may trouble parents. 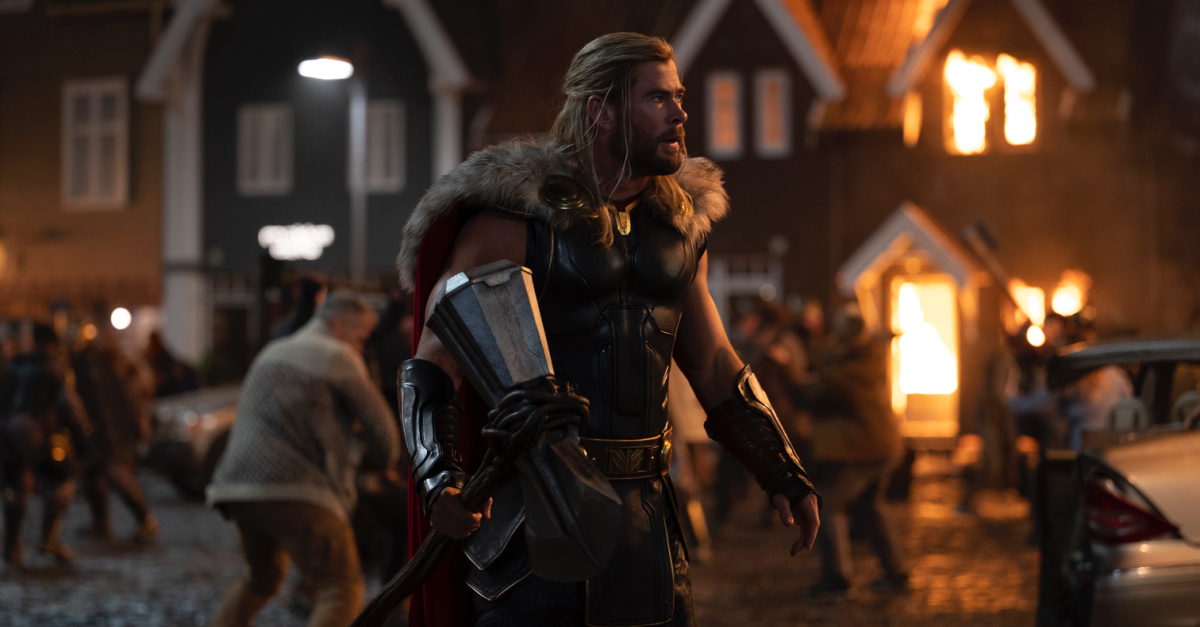 Love and Thunder contains no groundbreaking same-sex moments – Eternals was the first MCU film with a same-sex kiss – but it nevertheless continues Disney's recent push to include LGBT content. The most significant moment takes place when Korg sings a sexually suggestive song to Valkyrie and adds, "That is the song that my dad sang to my other dad when they were courting." When Valkyrie tells him she's not sure if she wants another "special something," he wonders if it's because "you lost your girlfriend in battle." (Valkyrie, who is known as a lesbian in the Marvel universe, kisses a woman's hand elsewhere in the film.) In the film's final moments, we hear Korg imply that he, too, is gay, having launched a future with a "dude I met called Dwayne." (We see them together.)

The film contains a moderate amount of language (details below) and a typical amount of Marvel movie violence, although we do see several characters impaled with swords. For children, the film's most frightening scenes involve Gorr kidnapping children from New Asgar – literally while they are sleeping – and holding them hostage on the other side of the universe. (They are kept together in an eerie dark chamber, which Gorr visits from time to time to frighten them. During one visit, he tears the head off a snake-like creature.)

Finally, Love and Thunder may be the first MCU film with a warning about "partial nudity" – a reference to a not-so-brief scene at Zeus' court when we see Thor, completely unclothed, from behind. (The women at the court faint in excitement.)

Love and Thunder likely will please fans of Thor films. Parents of young children, though, may have a different opinion.

Entertainment rating: 3.5 out of 5 stars.

This content first appeared on Crosswalk.com and is used here with permission. To view the original visit: https://www.crosswalk.com/culture/features/4-things-you-should-know-about-thor-love-and-thunder.html