When Jesus had tasted it, he said, “It is finished!” Then he bowed his head and released his spirit. —John 19:30

The cross was the goal of Jesus from the very beginning. His birth was so there would be His death. The incarnation was for our atonement. He was born to die so that we might live. And when He had accomplished the purpose He had come to fulfill, He summed it up with a single word: “finished.”

In the original Greek, it was a common word. Jesus probably used it after He finished a project that He and Joseph might have been working on together in the carpentry shop. Jesus might have turned to Joseph and said, “Finished. Now let’s go have lunch.” It is finished. Mission accomplished. It is done. It is made an end of.

And lastly, finished was our salvation. It is completed. It is done. All of our sins were transferred to Jesus when He hung on the cross. His righteousness was transferred to our account.

So Jesus cried out the words, “It is finished!” It was God’s deliberate and well-thought-out plan. It is finished—so rejoice! 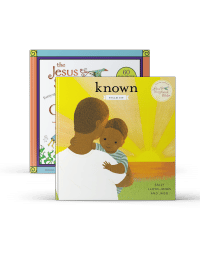 In thanks for your gift, you can receive The Jesus Storybook Bible Coloring Book for Kids and Known.

The Jesus Storybook Bible Coloring Book for Kids and Known by Sally Lloyd-Jones will help children unleash their creativity as they absorb the words that whisper the Lord's name. Activities like coloring will improve your children's pencil grip, help them relax, and develop their imagination.