This Christmas season may look different for many families.

Some of us are putting travel plans on hold or are gathering in smaller groups than usual due to the pandemic. It’s been a challenging year for us all, so even though the pandemic has an effect on the holiday season just like practically everything else in our lives, the extra time at home and slower pace of things can be a wonderful opportunity to focus on why we celebrate Christmas in the first place.

Many of us have family traditions of watching beloved Christmas movies. Some of these may be about Santa Claus, Rudolph the Red-Nosed Reindeer, Christmas elves, or feel-good Hallmark holiday romances. All of these are fun options, to be sure, and add to the joyful spirit of the holidays, but why not add some movies to your queue this year that particularly focus on the story of Jesus’ birth and the reason we celebrate Christmas to begin with?

The 10 Christian Christmas movies listed below are great options that can be enjoyed by the whole family. These films can also be a great catalyst for deeper discussions of what this season of Christmas means and why we celebrate it. Religious Christian movies can help us turn our eyes to the true meaning of the season.

The reason for all the joy, merriment, and festivities is that God sent Jesus “The Word made flesh” to earth to redeem us. Jesus is Emmannuel which means “God with us.” With that in mind, we hope you and your family enjoy these Christian Christmas movies that highlight the story of Jesus’ miraculous birth and what that means for us all.

This film is a dramatized version of the foretelling of Jesus’ birth. Well-known figures from the biblical account all play starring roles, including Herod, the Wise Men, the shepherds, Elizabeth, Joseph, and Mary.

There have been many romanticized portrayals of Jesus’ birth, but The Nativity Story seeks to portray what life was truly like at this time in Israel. Watching this film can help us grasp that the event of Jesus’ birth was grounded in history and involved real people with real lives.

You can buy or rent this movie on several popular streaming services such as YouTube, Google Play, and Amazon Prime Video.

This animated film tells the story of Jesus’ birth through the perspective of the animals, including a brave Donkey named Bo as the main character voiced by Zachary Levi.

Through a series of adventures, Bo gets to witness the miracle of the Christ-Child’s birth. This is a heartfelt film that strikes a great note between fun and sincere. The cast of animal characters is sure to elicit some laughs, especially from the kids.

The Star can also be found on popular streaming services such as Hulu, YouTube, Google Play, and Amazon Prime Video.

While not a Christmas movie per se, The Ultimate Gift still includes a Christmas scene and its theme of what is truly valuable in life certainly translates to the gift-giving of Christmas. This film tells the story of Jason, a young man who is used to a life of wealth and ease, but his life is about to take an interesting turn when his grandfather leaves him a gift in his will.

The gift is not simply a monetary sum, but, in order to earn it, Jason must follow a set of instructions. Along the way he discovers what is truly worth living for.

You can watch this film in its entirety for free on YouTube, Amazon Prime Video, or a number of other streaming services.

This Rankin/Bass classic claymation film has not achieved the same level of popularity as Rudolph the Red-Nosed Reindeer, Santa Claus is Comin’ to Town, or Frosty the Snowman, but it is worth the watch nonetheless. Although suitable for children, it does not shy away from the darker side of humanity and how grief can come even to children.

Aaron, the Little Drummer Boy, experiences the loss of his family and home and vows to hate all humans for what they did to overturn his happy life, but with only three animals for friends and his little drum, he finds new hope upon seeing the baby Jesus at his birth. This short film truly gets at the heart of how Jesus can turn even the stoniest heart toward love.

You can purchase it on iTunes or Amazon Prime Video or rent it on Google Play.

This film also bends the boundaries of Christmas movies a bit, but it does take place in a perpetual winter. As character Lucy Pevensie says, “Always winter and never Christmas; think of that! How awful!"

This film is based on the most well-known book in the Chronicles of Narnia series written by C.S. Lewis. It’s a tale of adventure, allegory, and has deep Christian themes. Father Christmas also makes an appearance.

This film can be rented on YouTube, Amazon Prime Video, Disney+, and other streaming services.

Also, as a bonus, you may want to listen to this song by Christian band Relient K which is based on the “always winter” line. 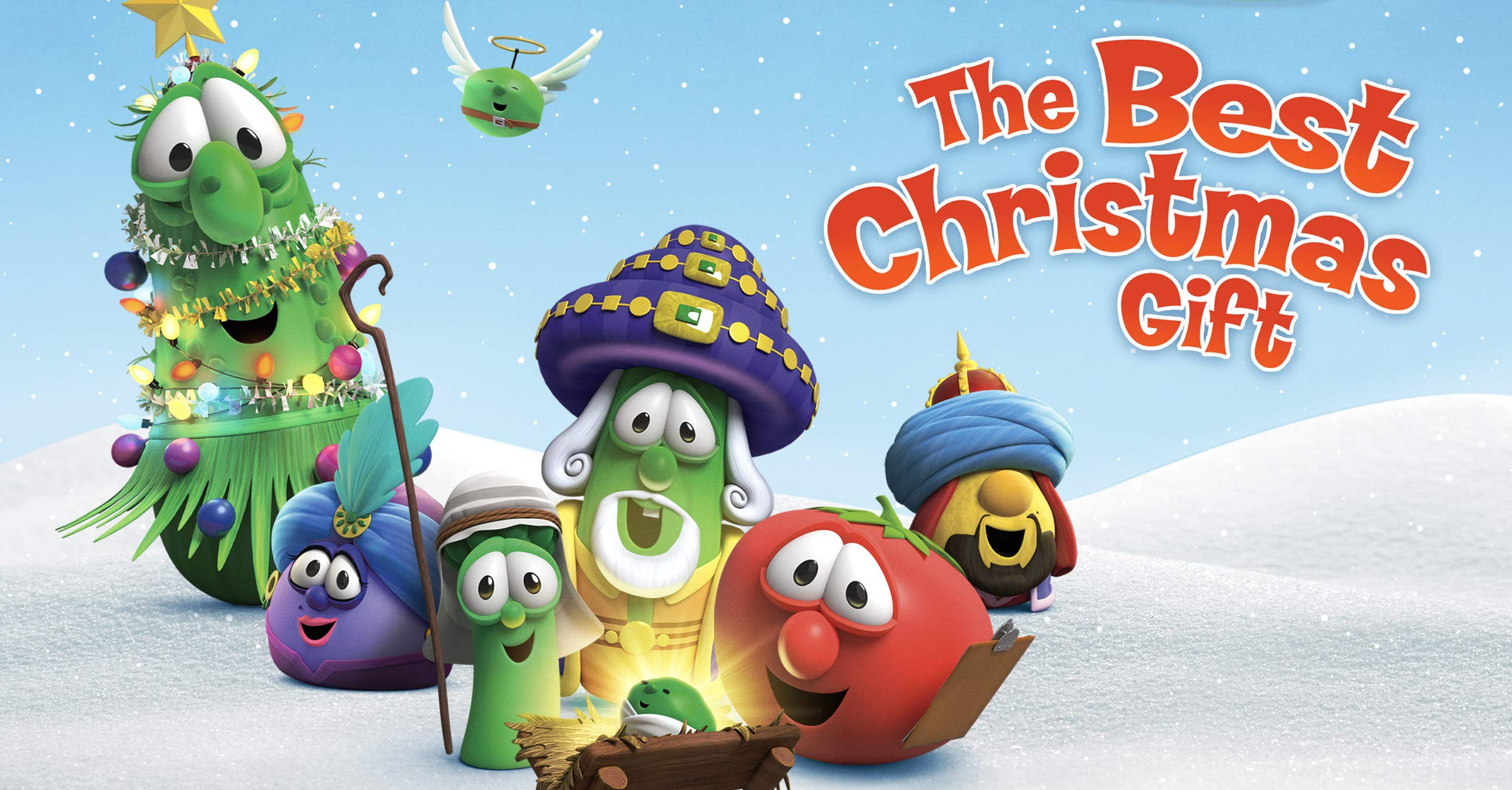 Bob the Tomato, Larry the Cucumber, and the beloved cast of veggies are back in this Christmas movie special.

The veggies are preparing to perform a Christmas show, but things are not going smoothly and tensions run high, but when they take a trip back to the first Christmas they are able to find their way back to the true joy of Christmas in the present: that God is with us.

This film can be watched on Vudu or the DVD can be purchased from various locations online or in-store. VeggieTales also have several other Christmas specials.

In the vein of The Nativity Story, this film seeks to bring to life the biblical story of the Magi or Wise Men who knew the prophecy of the Star and followed it on their journey to worship the Christ-child.

We are given some backstory about the Magi and watch as their often perilous journey to find baby Jesus unfolds. It is a fascinating dramatization of this time in history and the biblical record, and is sure to increase your appreciation for the significance of the Star in the biblical account. This film is not suited for younger children.

It can be streamed on Amazon Prime Video and Vudu.

This film, starring Christian celebrity Candace Cameron Bure, tells the story of Megan who must reevaluate her priorities when she gets to know a family whose son is battling cancer.

The family decides to celebrate Christmas early in October in order to give their son time to enjoy the special holiday season. Although sad, this movie is also heartwarming and raises questions of what is truly important in life: namely, faith, family, and bringing joy to others.

This movie can be streamed on Hulu, Vudu, and Amazon Prime Video.

This film is based on the novel of the same name by Christian author Max Lucado. It is sure to be a favorite for those who enjoy period dramas set in England. The story is of a new minister in a quaint nineteenth-century town.

The minister wants to modernize the small village, but instead of enacting his will on the town, he finds that it and its people have a way of influencing him, even with their ages-old belief in the power of the Christmas Candle. This film focuses on the miracle of Christmastime and of embracing the wonder.

It can be streamed on Vudu or Amazon Prime Video.

This classic Peanuts Christmas movie has surprising depth for such a short film based on comic strip characters.

Charlie Brown is struggling to find meaning during the Christmas season and the usual festivities just aren’t enough. He finally shouts, “Isn’t there anyone who knows what Christmas is all about?” That is when blanket-carrying Linus Van Pelt speaks up and quotes from the Christmas Story in Luke 2.

It’s a moving speech and gets at the heart of Christmas in a simple but profound way.

It’s also interesting to note that, when Linus gets to the part of the Christmas Story which says, “Fear not: for, behold, I bring you good tidings of great joy, which shall be to all people,” he drops his security blanket. You can read more about this poignant moment in the Crosswalk.com article “Just Drop the Blanket: The Moment You Never Noticed in A Charlie Brown Christmas.”

This movie can be streamed on Apple TV+ and will also air on PBS during the holiday season.

We hope these holiday films will bring some extra joy and meaning to your Christmas celebration this year. What other Christmas movies do you and your family enjoy watching each year?

Related: Listen to our new podcast, The Characters of Christmas with Dan Darling. You can find all of our episodes at LifeAudio.com. Here's Episode 1:

Veronica Neffinger wrote her first poem at age seven and went on to study English in college, focusing on 18th century literature. When she is not listening to baseball games, enjoying the outdoors, or reading, she can be found mostly in Richmond, VA writing primarily about nature, nostalgia, faith, family, and Jane Austen.

This content first appeared on Crosswalk.com and is used here with permission. To view the original visit: https://www.crosswalk.com/special-coverage/christmas-and-advent/family-movies-about-the-true-meaning-of-christmas.html