We Don’t Need a Castle
By: Anne Peterson

Keep your lives free from the love of money and be content with what you have, because God has said, “Never will I leave you; never will I forsake you. - Hebrews 13:5

Did you ever read the story, The Fisherman’s Wife? It’s a wonderful story about the fisherman who catches a magic fish. When the fisherman shared this with his wife she called him foolish and told him to go and have the fish give them a cottage instead of the small house they lived it. The fisherman obeyed and came home to a nice cottage. But a day later, the wife was dissatisfied and insisted he go back and ask for a castle. The fisherman reluctantly did that, and there was a castle in place of their cottage. A day later, the wife wanted to be queen of the whole land. Once again, the husband went to the fish and told him what his wife wanted. And even though that wish was also granted, the wife wanted to be ruler over the sun and moon. When the husband left the fish after telling him, he came home to find something that surprised him. He found his wife in the very little house they first had. The moral is: We should be content with what we have.

It’s easy to look around and see what others own and to be dissatisfied with what we have at the moment. In this age of technology, we are forever being shown things we should own. The whole psychology behind marketing is to make the potential buyer feel like he/she is missing out, if they do not have the newest of everything.

But God’s Word is what we should be immersed in, not the world and advertisements. Read Romans 12:2. God wants us to not be conformed to this world. We don’t have to follow the world’s pattern. If we read God’s Word, we see how important it is to be content.

When we think we lack things we’re entitled to, it’s a temptation to be dissatisfied with God’s provision. Read Philippians 4:19. God says he will supply all our needs. And he does this according to the riches in Christ Jesus. That’s amazing.

When we are discontent, it’s easy to have quarrels about money. Bickering separates couples, instead of bringing them closer. A man feels pride when he knows that he’s taking care of his family. Our thankfulness creates a loving atmosphere. 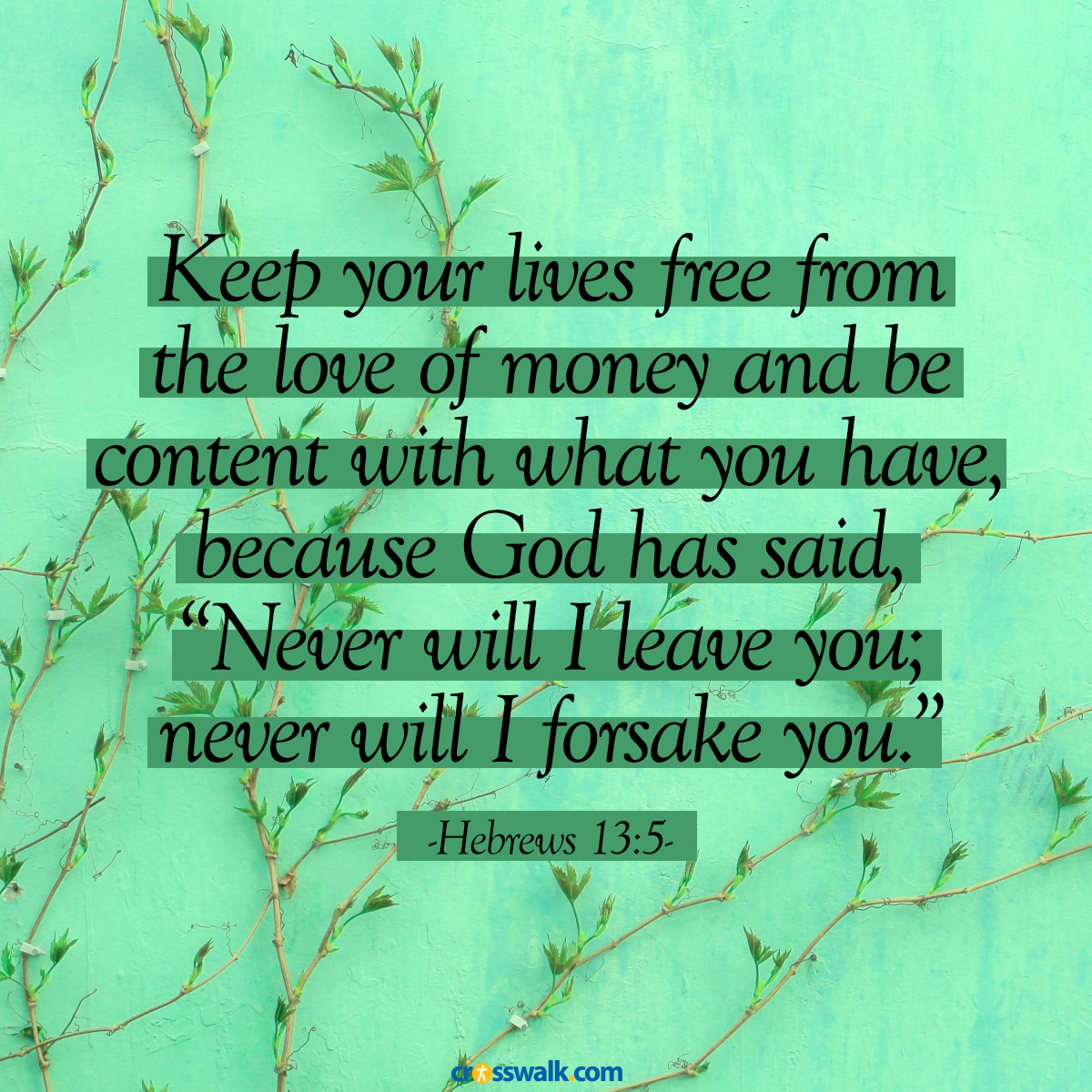 But thankfulness needs to be practiced. It’s easy to be thankful at first, and then just take what we have for granted. It helps to mention what you are thankful for, maybe to write it out. God is the one who provides for us. He gives us our jobs, and he also gives us the strength to do those jobs. God is a loving Father who takes good care of his children.

For those who struggle financially, it’s important to remember God hears our prayers. In 1 Peter 5:7, God tells us to cast our cares on him. He’s concerned about anything we’re concerned about.

Read 1 Thessalonians 5:18. God specifically tells us his will in this verse. It’s to be thankful in everything. That means even when things are tight, or you’re not sure how all the bills will be paid. God is sovereign. He has things under control. David was called a man after God’s own heart. One thing David often did, was look back on God’s faithfulness to him. We can be like David, if we take the time to remember all the things God has done for us. When we linger in that place of thankfulness, it makes people want to be around us. We can then create homes our husbands want to come home to. And our hearts will be content, not like a certain fisherman’s wife.

Anne Peterson is a regular contributor to Crosswalk. Anne is a poet, speaker, published author of 14 books, including her memoir, Broken: A story of abuse, survival, and hope. Anne has been married to her husband, Michael, for 43 years. Sign up for Anne’s newsletter at www.annepeterson.com and receive a free eBook. Or connect with her on Facebook.

At Easter, the Son of God took on the world’s sin and defeated the devil, death, and grave. How is it, then, that history’s most glorious moment is surrounded by fearful fishermen, despised tax collectors, marginalized women, feeble politicians, and traitorous friends?

In The Characters of Easter, you’ll become acquainted with the unlikely collection of ordinary people who witnessed the miracle of Christ’s death and resurrection. This FREE podcast provides a fresh approach to the Lenten season and can be used as a devotional or study for both individuals and groups.